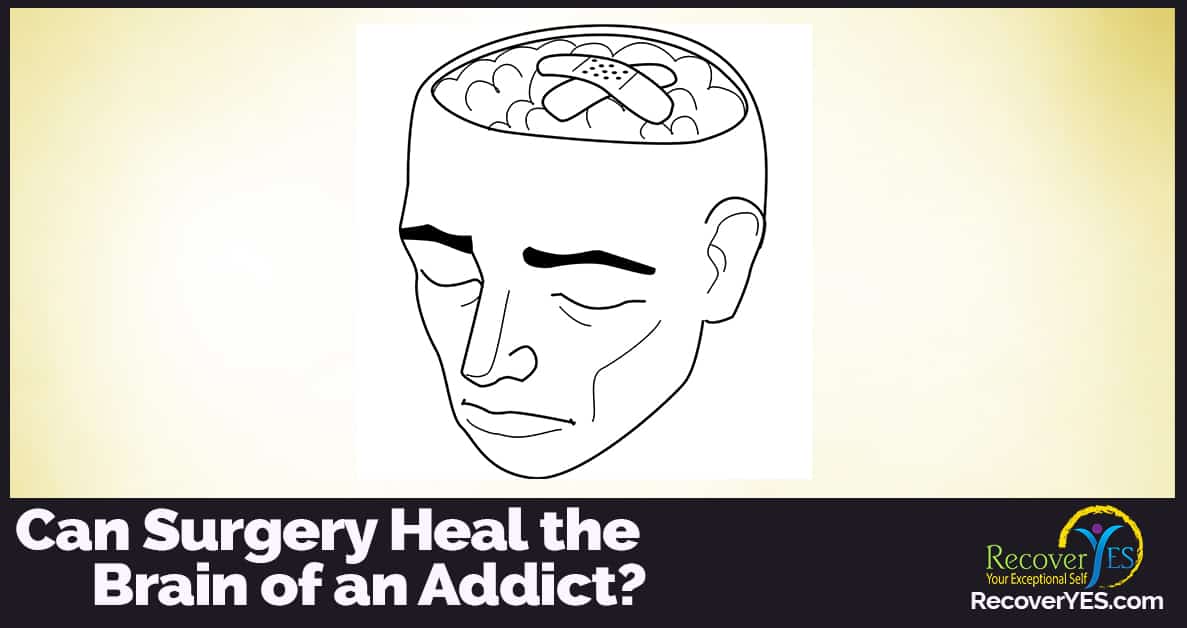 While it sounds promising, can surgery really heal the brain of an addict? And, if so, at what cost?

I found this article pretty disturbing. Any irreversible surgery…especially that involves the brain…should be given careful consideration. Understanding addiction and the way it effects the pleasure center of the brain should be part of the decision-making process.

The brain of an addict is now in the hands of surgeons.

As humans, we are “wired” to seek pleasure. This isn’t unique to addicts. Addicts have simply distorted the way they stimulate the brain to feel good. Sure, you might be able to “turn off” the pleasure-seeking area in the brain but that would leave a person pretty unhappy and potentially depressed. In fact, addiction studies have shown that recovered addicts have a higher than normal rate of depression and many attempt suicide. This is due to the effects of addiction on the brain…and not finding suitable alternatives that mimic the effects of the addictive substance in a healthy form.

Is Surgery the Answer to Heal the Brain of an Addict?

Moreover, in China, where addiction is so demonized that execution has been seen as an appropriate punishment, it’s highly unlikely that addicted people could give genuinely informed consent for any brain surgery, let alone one that risks losing the ability to feel pleasure. And even if all of the relevant research suggested that ablating the nucleus accumbens prevented animals from seeking drugs, it would be hard to tell from rats or even primates whether the change was due to an overall reduction in motivation and pleasure or to a beneficial reduction in desiring just the drug itself.

There is no question that addiction can be difficult to treat, and in the most severe cases, where patients have suffered decades of relapses and failed all available treatments multiple times, it may make sense to consider treatments that carry significant risks, just as such dangers are accepted in fighting suicidal depression or cancer. But in the ablation surgery studies, some of the participants were reportedly as young as 19 years old and had only been addicted for three years. Addiction research strongly suggests that such patients are likely to recover even without treatment, making the risk-benefit ratio clearly unacceptable.

It is of particular concern that this surgery would be considered for a young person. It is true that addictive behavior started at a young age arrests the development of the decision-making ability of the brain, I don’t believe it’s irreversible. Difficult, yes. Impossible, no! There are promising holistic treatment methods that are being used to help stimulate the brain’s natural chemical response. In order to heal the brain of an addict, you have to train it to behave as a normal (not addicted) person might.

In recent years, there has been a lot more addiction research produced on the brain’s ability to heal. We are staying on top of the latest addiction studies and will continue to provide useful information about addiction. Please share or like this if you’d like to be updated.

Computer Addiction | How to Tell If Facebook Is An Addiction? (It’s not just the time)